Blynk is another way of sending and visualising data, from the Octopus, besides using Thingsspeak. To use Blynk, one needs to register with Blynk and download the Blynk app (available on iOS and Android).

Set up a remote sensing device on Blynk

To set up a data transmitting device on Blynk, one needs to do the following:

From the Blynk app :
– Open the Blynk app on your smartphone.
– Click on “new project”.
– Choose “esp8266” for the “choose device” question.
– Wait for the “Auth Token” email that Blynk has sent.

END_OF_DOCUMENT_TOKEN_TO_BE_REPLACED

This article is a variation on the tutorial explaining how to make a CO2 measuring device using a Octopus microcontroller, plus CO2 sensors and optional displays.

As one might not always have an Octopus microcontroller at hand, people have asked me how to build a CO2Ampel – CO2 traffic light warning gadget – with a different microcontroller. Thankfully, such a device was recently assembled at Chaos Computer Club Freiburg.

To keep things inexpensive, we’re skipping the NeoPixel LED of the other tutorial, in this tutorial. Thus parts could be obtained for around 55 EUR.
Later, we’ll cover how to connect the measuring device described here, to various displays . Also, those interested in finding further tips and information, can find more information in the Octopus section of this blog.
(This post is for the most part identical with the CO2 Messen mit dem Octopus tutorial, also on this blog.)

I have provided links to the Mouser Onlineshop and to Tindie. You can also find the parts elsewhere, and my links aren’t affiliate links.

To program Arduino code with visual programming (Ardu)blocks, we need to modify the Ardunio IDE code editor a bit. (For those that prefer text-code, you’ll find the produced Ardublocks code, in text form, at the end of this tutorial).

The easiest way to get going is to use a Windows PC and install the software following the instructions (including download links ) from the Umwelcampus Birkenfeld website. Instructions for MacOS and Raspberry PI can also be found, via the website’s overview page. I’ve also made some tutorials for Mac OS here on my blog. There is a (German language) Tutorial for Raspberry Pi, too.

Windows: download the zip file with the ‘blocky’ Arduino IDE and then install the relevant hardware driver software. Install the Arduino into a very short File tree, et. C:/iotw. You may also have to take care if you have another Arduino Version already installed. Pay attention which do you start. Start by double clicking on the „IOTWerkstatt.bat“ file.

Raspberry Pi: Setup RaspberryPi Os (Raspbibian) for your Pi and then download the modified Arduino IDE from here.

Mac OS: this is a bit more complicated compared to Windows, but accomplishable using these instructions (in German, again), or the ones below. Here too, you need to install the relevant hardware driver software, and download the special Arduino IDE. This is done as follows:

Connect yellow on the D1, white on the D2, black on the GND, and red on the 3V. The cables connect with the Node MCU as shown in the table below. Now we need to solder them into place.

Here and now is a good time to solder the (Grove) cables to the Node MCU.
Then we can do fun things like connect a Grove LCD and a SCD30 CO2 sensor to the Node NCU, via a I2C hub. As the grove Cables have preset colours, this should be simple.

END_OF_DOCUMENT_TOKEN_TO_BE_REPLACED

Note for Mac and Pi users: Unfortunately, there’s an incompatibility with the Mac OS compiler and the Bosch BME680 BEC driver. Things fail in the compilation stage. A workaround is to read a single BME680 value at a time, or use a different BME680 driver, without BSEC. Sometimes it works, just try or use a windows system

The BME680 BSEC is a great sensor, which can measure:

The AQI value is calculated based on several factors. Thankfully we don’t need to worry about performing the calculations oursleves. The BME680 BSEC library does the complex calculations, and simply delivers us an AQI number. Simply select things relevan in the BSEC Block (the red arrow) and get the AQI value. 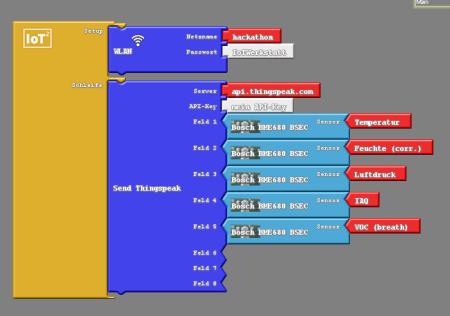