So we had to give this presentation of the finnish political party system. Something I found quite intresting.

But for the oversight slide: The Finnish Party System is competetive. There are currently 8 parties in parliament (excluding the Alands Coalition) in has been roughly this number for long time. There is no dominant party (example for a dominant party see Bavaria and the CSU). There are fairly elastic coaltion, even some coaltions that include Communists and Conservative Parties at the same time. The vote share of big parties is around 20 – 25%. If we use the Paul Lucardie Types most finish parties are either keepers of ideology or pragmatic power managers. There is some volaltility and high cooperation between parties.

The Parties that there are in the system are:

If you look at Stein Rokkans Theory of cleavage. Cleavages as big conflicts or fault lines of society. On this slide I clearl tried to give a representation of where which party is. (the green round flower modell in the country / periphery circle is the center party, te other the basic finns).

The Swedish Peopls party is liberal Party for swedish speking people and sorts of not reall representing any cleavage. Its formed aroudn „ethinic“ or linguistic lines.

More intresting, and unfortunatly we didn’t have time to show this slide. But its about the left right develoment of parties. It ist based on coding of the party programms. I think its quite an intresting project and with it you can research the development of many party systems, including the German.

What you can see for Finland is: the Party System was really most to the left in 1975 (the social democratic party beeing more left then the greens or the left league today! Even the NCP and Centre Party were much more left! With the Christian Democrats beeing an really right wing party.

Fast Forward that to 2003 and we notice a couple of things: All parties have drifted more to the right, except for the Christian Democrats. Most dramatic for National Coalition, which is now economically a really right wing party. And there seems to be hunge policy merging of the Ture Finns, Christian Democrats, Swedish Peopls Party and Centre Party. They all seem to be very close on the left ring specturm. One could ask if this is a neoliberal centre-right consensus.

Annotation: All calculations and the CMP-Code are based on Budge, Ian et al. 2001: Mapping Policy Preferences. Estimates for Parties, Elctors, and Governments 1945-1998. Oxford: OUP and 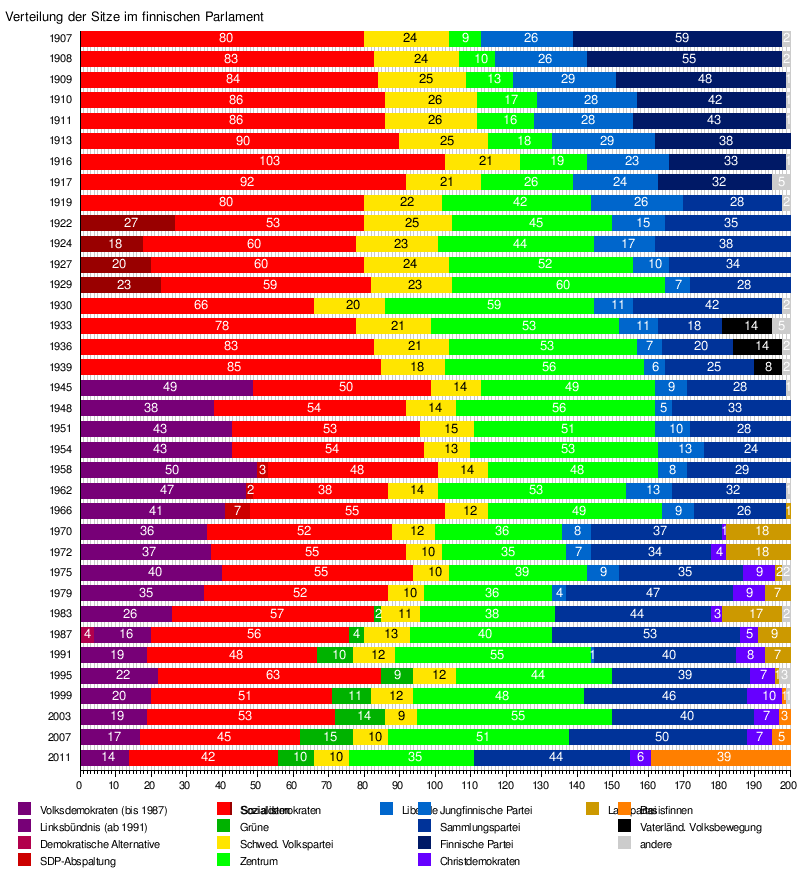 The graphic is from the German Wikipedia Article about Finish Politics, even statistic Finland didn’t have something like that.

Correspondingly is this graphic of the finish elections results through time. I looked for this for days and then it was on the german wikipedia.

When it comes to present day parties, we see it on this slide. It is based on expert interviews. Intresting that the consus among these is to gauge the Basic Finns (PS in the graph) as a socially authoritarin but economically left wing party. With the Christian Democrats beeing actually even more conservative. Kokomus comes true to its liberal heritage and is socially liberally but economicall right party. Where as the Finish greens seem to be centre left on the economy but very liberal on social issues.

From this graph one might actualyl ask if there is such a thing possible as a SDP / PS coalition based on their respective economic views.

„Democratic Consolidation of the Political System in Finland, 1945-1970: A potential Model for the New States of Central and Eastern Europe?“ Indira Konjhodzic, Sussex European Institute, https://www.sussex.ac.uk/webteam/gateway/file.php?name=sei-working-paper-no-17.pdf&site=266